St. Croix Sourcethe art of publishing
HomeStory SeriesBudget CrisisThe V.I. Budget Crisis, Part 12: What Else Can the USVI Do...

The V.I. Budget Crisis, Part 12: What Else Can the USVI Do To Help? Rationalizing Government Agencies

As the territory struggles with its budget crisis, Gov. Kenneth Mapp and members of the Legislature have talked about possibly consolidating some government agencies to save money by cutting administrative costs or operating more efficiently.

Public Works used to manage the sewer system and the territory’s landfills as well as build roads and oversee government construction projects. But after years of failing to meet court orders and chronically underfunding waste management, in 2006 the territory created the Waste Management Authority, on the theory those functions were better suited to a standalone entity. The WMA has accomplished a lot, especially in getting new sewer treatment plants online, despite its struggles, chronic sewer spills. difficulty with paying contractors and needing funding to close the landfills.

Lately, the moves have been more toward consolidation, with elected officials looking at consolidating hospitals, elections boards and courts.

The territory recently passed legislation, championed by Sen. Kenneth Gittens, to consolidate the territory’s two elections boards. Reducing confusion and acrimony in the elections process was Gittens main goal, not saving money. After all, the boards have a combined budget of less than $200,000 per year.

That small move met with opposition. Many elections board members, including St. Croix Board Chair Liliana Belardo de O’Neal and St. Thomas/St. John Board of Elections Chair Arturo Watlington Jr.have vigorously opposed the change. Unifying the boards means there would be only one chair, vice chair and so forth, diluting the perceived prestige of members in the separate boards.

In a February hearing, Sen. Kurt Vialet of St. Croix suggested the loss of personal prestige and position is Watlington’s real objection, saying, “It is really simple. It is all about jurisdiction and who is king.”

Senators keep raising the idea of consolidating the governing boards and administration of both territorial hospitals too. 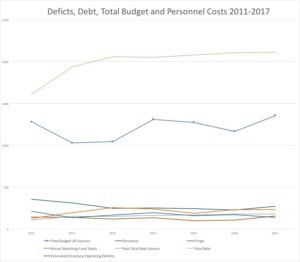 In 2013, Sen. Sammuel Sanes proposed legislation to consolidate the boards. The legislation was not adopted then. Sanes said at the time he envisioned one hospital board, one chief executive officer and one chief financial officer. He said it would reduce management costs and the hospitals would save by negotiating jointly with vendors. Board members at both hospitals have discussed consolidating some functions, but little has happened.

The idea of merging the courts has come up several times over the years. Multiple years of budget cuts and the Supreme Court recently taking on full authority as the territory’s court of final appeal have increased the interest in recent years. Supreme Court Chief Justice Rhys Hodge urged the merger during budget hearings in 2013, citing a National Center for State Courts study that estimated the merger would save $1.5 million to $1.8 million per year. Superior Court Presiding Judge Michael Dunston has been steadfastly and vigorously opposed to consolidating.

Dunston told senators in 2014 that the courts have different roles and that if the Supreme Court oversees the court system as a whole, “my position would become a figurehead.”

Over the past decade, senators have periodically discussed consolidating lottery and casino gaming but have not moved legislation to do so.

The Casino Control Commission regulates slot machines and casino-type gambling, which currently generate a bit less than $2 million per year toward the General Fund. The Lottery Commission regulates slot machines that are called video lottery terminals or “VLTs” on St. Thomas and St. John, which generate about $4.5 million for various government programs each year, and subsidizes the V.I. Lottery by a similar amount. On and off track horse race betting is overseen by the volunteer St. Croix Horse Racing Commission and St. Thomas/St. John Horse Racing Commission. Slot machines and casino gambling regulated by the Casino Control Commission gets some public oversight during annual budget hearings. Lottery and VLT slot machine gambling get a little bit of public oversight in separate budget hearings. Whatever tax revenue horse race gambling may contribute is not visible in any public V.I. government budget documents and those commissions do not give budget testimony to the Senate. The V.I. Department of Justice’s Division of Gaming Enforcement plays a role in enforcement in all areas of gambling.

The video lottery terminals are nominally under the V.I. Lottery Commission, but repeated audits have found insufficient oversight. When Southland Gaming of the Virgin Islands got the contract to run the machines in 2003, some questioned the legality of the action, arguing it was a backdoor way to bring slot machines to St. Thomas. The V.I. Casino Control Act restricts slot machines to St. Croix to encourage hotel development there. As Southland Gaming Vice President Shaine Gaspard testified to the Senate last fall, “a slot machine and VLT are virtually the same machines, certified by the same labs against the same standards.”

The V.I. Casino Control Act defines the types of games controlled by the act as “(a)ny banking or percentage game located within the casino or simulcasting facility played with cards, dice or any electronic, electrical, or mechanical device or machine for money, property, or any representative of value;” “gambling” as “the dealing, operating, carrying on, conducting, maintaining or exposing for pay of any game,” and gaming equipment as “any electronic, electrical, or mechanical contrivance or machine used in connection with gaming or any game.” VLTs are electrical machines used in connection with “gaming” or gambling. Players put money in a slot in the VLT machine and push a button or two, hoping to get lucky and have their gambling pay off. Nonetheless, since 2003, the Legislature, courts, successive governors and Casino Control Commission have all treated VLTs, as devices that are not covered by the Casino Control Act.

Reforming the law and consolidating all gambling oversight under a single entity would bring coherence and transparency to gambling regulation, and probably save some money. In political science, one of the traditional measures of “development,” that ephemeral, desirable quality certain countries have and others do not, is whether the law and institutions perform the way they say they do, or if informal practices instead dominate how government actually operates. Clarifying what the law actually allows so the text of the law conforms to the actual practices in the territory can only be good. It may not save the large sums needed to help close the deficit but it would be a small move in a progressive direction.

Move the functions of the Office of Veterans Affairs to the Department of Human Services.

The Office of Veterans Affairs is tiny and serves a small clientele. The massive Department of Human Services already performs similar services for a much larger clientele. Veterans Affairs helps some veterans with costs for traveling to get Veterans Administration Health Care and it pays burial costs for V.I. veterans in V.I. cemeteries. It has a budget of about $350,000, much of which is spent on the salaries of its handful of employees and rent for its offices. Clearly, there is not a lot of money to save here.

But Human Services, the second largest government agency, already provides very similar services. It has 933 employees and a budget of between $60 million and $70 million in local funding and nearly another $70 million in federal funding each year. It serves V.I. senior citizens and others. Many of those the Office of Veterans Affairs serves are also senior citizens. It would be more efficient and save at least some rent and utility costs to consolidate Veterans Affairs into Human Services.

Strengthen Board of Education and Place Within Education Department

Most stateside boards of education have far, far more power than the V.I. Board of Education. The V.I. board certifies teachers and doles out a basket of small college scholarships. Most boards are also responsible for actual oversight of the education system. They frequently hire and fire professional superintendents who run day to day operations and approve school system budgets, from a mix of county, state and federal funding sources. The V.I. board, with an annual budget of about $1.75 million, does none of those things. Instead, the Office of the Commissioner of Education oversees all school operations and the commissioner is selected by the governor, changing with every election, if not more often. If the board is only going to serve the administrative function of certifying teachers, it might make more sense to fold it into the Department of Education. Also, many districts with elected school boards fund the school boards through the school system budget, not with a separate budget.

Giving the school board real teeth by giving it some control over how Education Department funding is spent and over hiring top administrators might help reduce political appointments to the department and give better oversight than the single day of budget hearings the Senate is able to devote to it each year. The Department of Education’s budget of about $205 million per year gets roughly as much oversight time as Sports Parks and Recreation Department’s $5.5 million budget or the Office of Veterans Affairs’ $350,000 budget: several hours before the Senate Finance Committee, one day each year.

Reorganizing these agencies may save small amounts by itself. But in an era of tightening budgets, giving the Board of Education budgetary oversight and scrutinizing the Education Department more closely may at least help the department put its resources to better use and get more bang for the buck from the most expensive V.I. department.

For decades, senators have historically been reluctant to give up authority of any kind, especially budgetary authority. But nothing focuses the mind like a crisis. Now is the time to try.

Yet these changes, while helpful, are not going to solve the territory’s difficulties. Agencies are struggling to make do with their resources. These changes could help the government use its resources to better effect but will not change the fact that many agencies have big unmet fiscal needs. Where else can the territory find new revenues to pay for services?