The St. Croix Central High School (CHS) inducted 22 students into its Student Government Association (SGA) on Friday, March 22, at the school. The ceremony lasted about an hour and was organized by current SGA members and advisors.

Spanish teacher and SGA advisor Annette Garcia, Ph.D., welcomed guests and inductees to the ceremony.
“It is a pleasure to welcome and congratulate our candidates. We are here to induct you into the Student Government Association as it molds dynamic leaders and scholars,” she said. “You are among a distinguished group of students who possess qualities of leaders and scholars alike.”

Lluvia Muñoz, SGA historian, shed some light on SGA over the years. “The St. Croix Central High School has always had a Student Government Association. However, there were a few years of inactivity,” she said.

“The goal of SGA is to foster a degree of unity, respect, school spirit and cooperation among students, faculty and administration. The organization was reenergized in January of 2018 after being inactive following the 2006 -2007 school year.”

This group of student leaders is a democratic institution and an official school-recognized forum through which students may address school-related issues affecting the student body.

DeGazon, whose daughter was inducted, shared words of encouragement with students.

“Student Government Association is more important than you know. When you apply for schools, scholarships and employment opportunities and you’re able to put down that you were a part of SGA, it matters. It holds weight. It sets you aside, so people take you seriously. I encourage you to stay involved, stay active and join other organizations,” she said.

The freshman senator also told students that she partly selected Ki-Ana because of her leadership and involvement in student government.

Acting Principal Yves Abraham closed out the ceremony with a charge to the student leaders.

“You are the individuals who set the tone for the campus. You are to come up with ideas and activities and bring them to us. Once you come with good ideas, we’re going to make it happen! Because we want to make sure you enjoy your school experience. We want you all to say, “I want to go to school!” said Abraham. 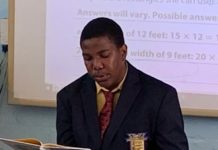 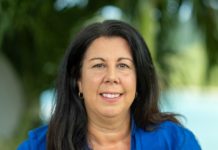