Irma’s Strength Fluctuates as It Advances Towards V.I.

The strength of Hurricane Irma has fluctuated from Friday to Saturday as the storm continues on a westerly track towards the Caribbean. Forecasters at the National Hurricane Center still expect it to be a “major hurricane” when it arrives in the region, probably late Tuesday.

Irma’s power dropped slightly Saturday, from a category 3 (sustained winds from 96 to 112 knots – or nautical miles per hour) to a category two (winds of 83 to 95 knots.)

Irma first was designated a tropical storm on Wednesday, and in less than 24 hours had roared to life, being designated a category 3 hurricane on Thursday, with winds increasing 50 percent, from about 50 knots of sustained winds to 100. 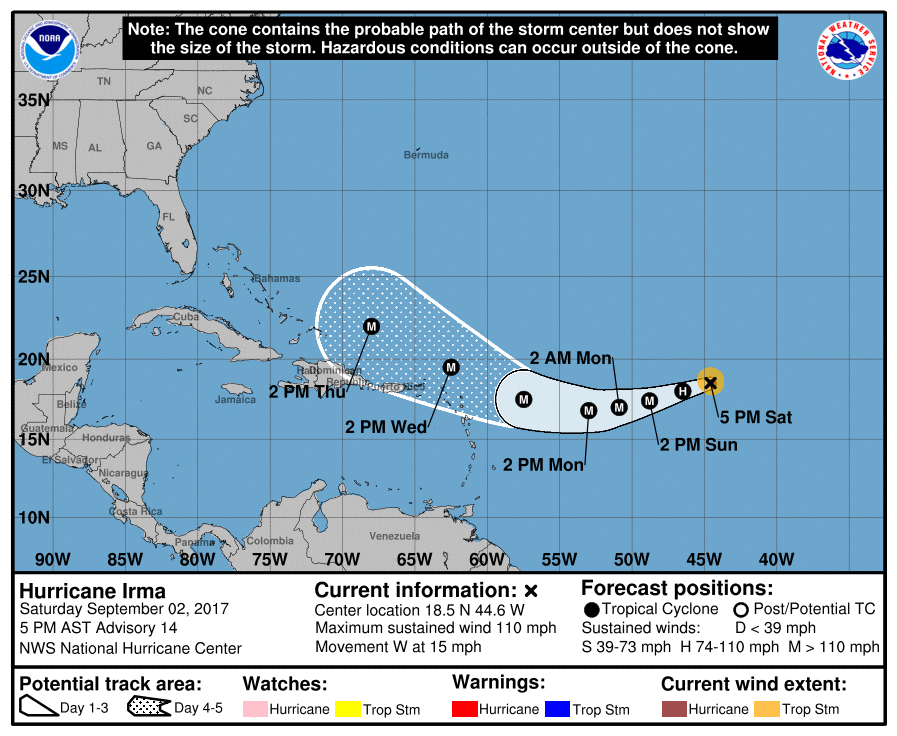 Conditions over the next day or two should continue to be variable, the NHC noted.

“The environment in which Irma is embedded shows mixed signals for the next few days. While the vertical shear remains low through Monday, the SSTs (surface temperatures) are lukewarm and mid-level humidities are dry,” the NHC reported.

That is likely to change come Monday, as the forecast anticipate gradual intensification.

“Irma should encounter warmer water and increasing moisture at a time when the vertical wind shear may be increasing. Given the uncertainty on when all of the ingredients may come together, the new intensity forecast is the same as the previous forecast and calls for gradual intensification through the next five days.”

However, an alternative forecast scenario sees Irma getting significantly stronger than forecast if the shear is less than anticipated.

The hurricane is still marching westward across the ocean, and the U.S. Virgin Islands are still within the cone that suggests its most likely path.

No hurricane warnings or advisories have been issued as of 5 p.m. Saturday. But the tracking models have shifted slightly and now have the storm drawing closer to the Virgin Islands when it arrives in the Antilles Tuesday. Even if the storm does not make landfall in the territory, a close pass could bring high seas, heavy wind and plenty of rain that would make life difficult.

The NHC urged residents in the Lesser Antilles to monitor the progress of Irma through the weekend and listen to any advice given by local officials.

The National Hurricane Center said Saturday in its 5 p.m. AST update that is expected to produce rough surf and rip currents, and could cause dangerous wind, storm surge, and rainfall impacts on some islands.

The National Weather Service at San Juan advised that marine conditions will deteriorate by early next week. Seas of 12 to 15 feet in coastal waters and offshore up to 18 feet or greater are possible by midweek, according to the NWS.

VITEMA Director Mona Barnes encouraged the community to continue to remain vigilant and to monitor weather reports on Hurricane Irma.

“In the event the U.S. Virgin Islands is placed under a hurricane watch or warning, the community is advised to ensure safety is paramount,” VITEMA said.

Barnes also encouraged boaters and beachgoers to remain out of the sea as early as Sunday.

“Adequate preparation is critical. Ensure you and your family are informed and prepared. Your plans should also include family members with access and functional needs, and pets,” Barnes said. “Don’t wait for a hurricane watch or warning to prepare. Now is the time to stock up on emergency supplies, make sure everyone in your home knows what to do in an emergency and stay informed about the weather using credible sources of information. As a territory, we will continue to do our very best to ensure we are prepared to protect the people of the Virgin Islands.”

The forecast is even less clear on what the storm might do once it passes the territory.

have on the Bahamas and the continental United States,” the 5 p.m. report said. “Regardless, everyone in hurricane-prone areas should ensure that they have their hurricane plan in place, as we are now near the peak of the season.”