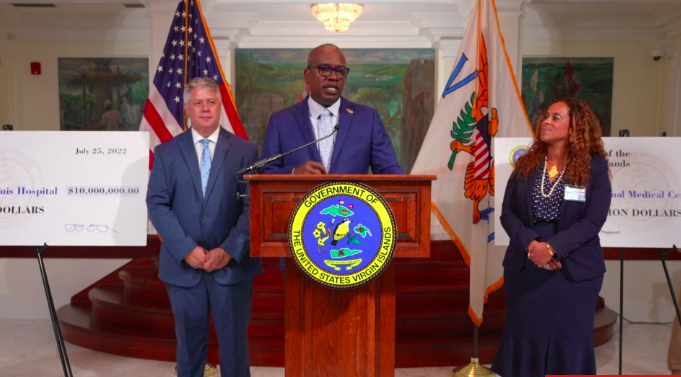 “We very much look forward to using this money in the best interests for the people, to be able to recognize, reward and retain the hard-working staff, recruit needed personnel and continue to advance our information technology projects,” Tina Commissiong, SRMC’s chief executive officer, said.

“This money will go a long way in securing our workforce in the future. We have many challenges at Juan F. Luis Hospital, recruitment and retention of our employees being at the top of the list. We also have many infrastructure needs that need to be done at our hospital. This $10 million will go a long way in making this happen,” Doug Koch, JFL’s chief executive officer, added.

Bryan said the $20 million in American Rescue Plan Act funding was in addition to $100 million in ARPA medical investments over the last two years, such as the new high infectious disease unit at SRMC, a new diabetes education program and center, the extra hospital created and staffed at the V.I. National Guard Center in case there was a COVID overrun, and a new dialysis center.

“This is not the end of the giving but the beginning of the giving to create an environment that can attract medical professionals to treat us and give people the health care they deserve,” Bryan said.

In addition to the ARPA funds designated for the territory, there will be more available over the next four years, according to the governor. He listed a number of programs funded so far, including premium pay checks that were mailed out recently to 1,600 private and public workers who worked throughout the pandemic. The V.I. Water and Power Authority received $22 million in ARPA money to keep light bills from increasing for Virgin Islanders, and the Waste Management Authority received $14 million to keep trash services going.

Recently, several foundations received funding, Bryan said, for education and summer camps, and $14 million is targeted for broadband expansion. There also will be inflation fighting funding as well, he said. Funding for housing, paying out more tax returns and retroactive claims for retirees are also on the governors to-do list, he said.

The governor also explained the state of emergency he filed over the weekend that was approved by FEMA on Monday to deal with the large quantities of sargassum invading the beaches, especially around the St. Croix WAPA plant.
The reasons for declaring the emergency, he said, include the nausea-causing odor, the economic impact at resorts, and clogging water intakes at WAPA on St. Croix. Sargassum also kills fish by robbing oxygen from the sea. Worse, blankets of the foul-smelling mass are expected to impact the islands into November. The State of Emergency allows FEMA to pay 90 percent of the cost of mitigation, with the Virgin Islands covering 10 percent.