St. Croix Sourcethe art of publishing
HomeNewsLocal newsApproaching System May Be a Tropical Depression by Tuesday

Approaching System May Be a Tropical Depression by Tuesday 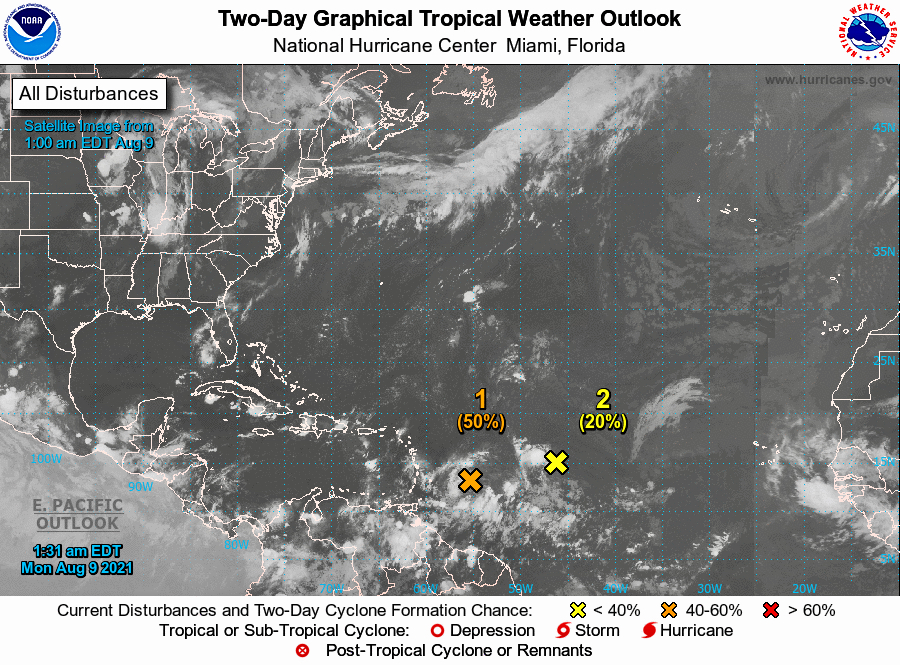 Two tropical disturbances approaching the U.S. Virgin Islands may bring some rain and wind to the region, but the first of the two, Invest 94-L, has the better chance of intensifying and could be a tropical depression by the time it arrives in the territory, the National Hurricane Center reported.

In an update issued at 2 a.m. EDT, the NHC said Invest 94-L was located about 380 miles east/southeast of the Leeward Islands, producing disorganized showers and thunderstorms.
Environmental conditions are expected to be conducive for some development over the next few days, and a tropical depression could form while the low moves west-northwestward at about 15 mph, according to the report. The disturbance is forecast to reach portions of the Lesser Antilles by late Monday, then move near the Virgin Islands and Puerto Rico on Tuesday, and be near Hispaniola around the middle of this week.

A second system is producing disorganized showers and thunderstorms about 1,000 miles east of the Lesser Antilles. Development of this system is becoming less likely during the next few days while it moves toward the west or west-southwest at around 10 mph, the National Hurricane Center said, giving the system a 20 percent chance of formation through the next 48 hours, and only 30 percent in the next five days.