The results were astonishing. Over the course of several weeks, almost 500 masks were completed as part St. John’s first public art project with an art therapy component.

The process of making these masks, and how the community was affected by it, has been documented in a 12-minute film, “Masks in the Aftermath.”

Now the creators of the project want to take it several steps further. In addition to extending the film, they want to explore how the arts can be integrated with mental health programs in the U.S. Virgin Islands and create opportunities for local artists. In order to do this, they’ve launched a fundraising initiative on Indiegogo, an online crowdfunding site for artists and entrepreneurs.

The film “Masks in the Aftermath” can now be viewed by the public on the project’s fundraising page. The page also describes the project’s genesis, its many accomplishments, and its potential for helping communities deal with disasters.

“Research has shown that community art projects and art therapy have been effective in carrying out creative community-building, which is essential in the disaster recovery process,” Knight said. “This has been our collective experience on St. John after the hurricanes. Our experience has shown us that art programs help communities heal and recover.”

Working with masks is a well-known therapeutic practice, as it opens opportunities for individuals to explore aspects of themselves, their fantasies, and their cultures. It’s even more appropriate in the Caribbean where mask-making and masquerading have a long tradition. In fact, many of the project’s participants wore their masks during the St. John July 4th Festival parade.

The local community had further opportunities to enjoy the masks when they were shown in two Cruz Bay locations during the summer of 2018; following that, several dozen masks were selected for display at the Department of Interior in Washington D.C. in the fall.

The whole process was captured by filmmaker Crystal Fortwangler, assisted by graphic designer William “Bill” Steltzer and St. John high school student Ameir Sprauve. The team behind “Masks in the Aftermath” now wants to raise $25,000 to extend the film’s length and deepen the conversation about the need to improve access to mental health services.

“There is an extraordinary need for greater mental health support in our islands, and even more so in the aftermath of disasters,” said Knight. “In March 2019, V.I .Gov. Albert Bryan Jr. declared a mental healthcare emergency in the U.S. Virgin Islands because of a  shortage of psychiatric physicians and behavioral health providers. We believe producing a feature-length documentary film can help make the case for professional art-therapy programs in the USVI.” 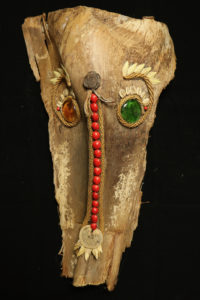 The project’s creators now hope to bring together local mental health care providers with art-therapy professionals and capture it all on film. They also want to create opportunities for artists in the community through several related projects: St. John graphic artist Kamaria Penn is now working on a companion book, and art student Lauryn Sinclaire Samuel is designing a set of notecards that can be sold to raise funds.

On the Indiegogo fundraising page, donors can choose (as a gift) a poster, a book, or a set of notecards, depending on the amount of the donation. They can also become the owner of one of the unique masks made during the project. (Many well-known St. John artists made masks during the project, but in keeping with the project’s nature, their work is anonymous.)

As an additional outcome, the project’s creators hope to set up a St. John Arts & Cultural Emergency Fund to support local artists in need.