Biotechnology Takes on Mosquitoes in the Battle Against Dengue, Zika, Chikungunya

If you want to know what positive role the mosquito plays in the universal Chain of Life, don’t bother asking Krystal Seger to solve the mystery.

She’s been studying the pesky little devils for 15 years, honing in on the infamous Aedes aegypti species, and she has yet to find a redeeming quality. Yes, they do provide a food source for birds and bats and a few others, but they don’t seem to be essential.

As far as we know, “There’s no animal that relies only on the mosquito to live,” she said. And the idea that spiders, bats and birds can keep a check on the mosquito population is simply wrong.

Seger is a medical entomologist, that is, a scientist who studies disease-bearing insects. She began working on a mosquito control project with the V.I. Health Department in the wake of the Zika outbreak about five years ago.

The Aedes aegypti mosquito is a vector for the viruses that cause Zika and chikungunya – both diseases recently found in the territory – as well as for dengue, which was identified on St. Croix in the 1800s and which has caused periodic outbreaks throughout the islands for several decades in more recent times.

All three diseases can cause flu-like symptoms which range from mild to severe, and Zika can also cause brain damage to babies in the womb. The first reported case of chikungunya in the territory was in May 2014. The first case of Zika was reported in January 2016. Both disease outbreaks lasted roughly one year and involved thousands of patients.

The Health Department began an Aedes aegypti monitoring program more than four years ago, at the beginning of 2017. It was interrupted for a month or so after the September 2017 hurricanes, but otherwise has continued “non-stop,” particularly on St. Croix, Seger said. As the researchers have learned more about their prey’s habits, they have tweaked the program.

The department uses specially designed traps to capture mosquitoes. Depending on the number of staff available at any given period, there may be as few as 20 or as many as 120 traps deployed throughout the territory, she said.

The traps look a little like a bucket or a small garbage can. From the colors (navy blue for the canister, white for the lid and black for a ring around the entrance to a mesh bag) to their odor (they emit a fragrance that smells like juicy humans) to their placement (in bushy terrain near sites of previous disease outbreaks), everything about the traps is designed to attract blood-thirsty female mosquitoes, the only ones that bite, and Aedes aegypti females in particular.

“Aedes aegypti really like to live around people,” Seger said. “So we put (the traps) around where people are.”

The species is, in fact, invasive, she said, which adds to the difficulty of control. It probably came to the Caribbean from Africa during the slave trade. It can and often does lay its eggs in very small amounts of water – the spill-over in a houseplant saucer, a pocket crease in a tarp covering a boat, a discarded child’s toy, an old bottle. Larvae can thrive in areas too small to accommodate their predators, such as tadpoles, so the survival rate is high. 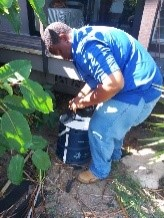 Traps are left overnight and emptied the following day. Despite their design, they do collect some mosquitoes of other species and some males along with females. The Aedes aegypti are separated out and frozen. It’s a tedious process. Seger said she’s been studying the insects so long that she is able to differentiate them with her naked eye, but, like others new to the procedure, she uses a microscope to be sure.

There’s no way to extrapolate from the data an estimate of the number of mosquitoes that regularly call the Virgin Islands home, Seger said. “I cannot begin to do that.”

But what her team does hope to do is establish patterns of when there are more or fewer of the insects, in more specific detail well beyond the general anecdotal maxim that rains bring mosquitoes.

The research could help lead to implementing a control program based on biotechnology and the Wolbachia bacterium.

About 60 percent of insects, including some mosquito species, have Wolbachia bacteria naturally, Seger said. But the Aedes aegypti does not.

Researchers have manually introduced Wolbachia into mosquito eggs with the intention of affecting not only an immediate generation but also future generations.

Early in June, a report published in the New England Journal of Medicine described a years-long study showing the method was highly effective in reducing the instance of dengue in one region in Indonesia. The authors suggested the method may also work against Zika and chikungunya, though more study is needed.

The Health Department had been posed to implement a Wolbachia-related pilot program on St. Croix but had to suspend it last year, in large part because Covid-19 interrupted work at Verily Life Sciences, the San Francisco biotechnology company Health was relying on for expertise in separating males from females. Meanwhile, the federal grant supporting the project ran out.

“The big thing is always funding,” Seger said. Having to halt the project “was a big disappointment.”

She’s not giving up though. If her team can confirm a pattern for when there are the fewest mosquitoes, then they will know the best time to introduce biotechnical controls.

With a bit of time and sufficient resources, she said, “I really think we could eliminate the Aedes aegypti completely” in a small area like the Virgin Islands.