President Donald J. Trump has approved Gov. Albert Bryan Jr.’s request for an emergency disaster declaration for the weather system that moved through the territory on Wednesday, July 29.

Governor Bryan submitted his request on Monday in advance of the storm’s impact. On Wednesday, the governor also issued an executive order declaring a state of emergency that establishes a curfew from midnight through noon on Thursday, July 30, and authorizes the Department of Licensing and Consumer Affairs to declare a price freeze.

Regarding the federal declaration, FEMA announced federal disaster assistance has been made available to the territory to supplement its response efforts in the areas affected by Potential Tropical Cyclone Nine from Monday, July 27, and continuing.

William L. Vogel has been named as the federal coordinating officer for federal response operations in the affected areas. Additional designations may be made at a later date if warranted by the results of the damage assessments.

Bryan scheduled a press conference for 7:30 a.m. on Thursday to report on the storm’s impact. He also plans to make a determination about reopening government offices – which he closed from 1 p.m. Wednesday through Thursday – and the status of the curfew that was in place until noon Thursday.

The press conference will be carried by local radio stations and streamed live on the Government’s page at www.facebook.com/governmenthouseusvi. 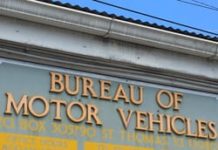