Nathalie Lopez, 31, of San Juan, Puerto Rico, pled guilty Thursday in District Count to one count of possession of marijuana with intent to distribute on board an aircraft, U.S. Attorney Gretchen C.F. Shappert announced.

According to court documents, on Feb. 17, 2017, Nathalie Lopez traveled on American Airlines flight No. 1293 from Miami to St. Croix, via the Henry E. Rohlsen Airport. She checked one box containing five separate vacuum-sealed packages of marijuana, weighing approximately 4.5 kilograms.

Once Lopez arrived on St. Croix her co- conspirator, Gibbs Bully, retrieved the box containing the marijuana from the baggage carousel and was immediately detained by Customs and Border Protection officers.

Sentencing for Lopez is set for Nov. 4.

Gibbs Bully previously pled guilty to the charge of possession of marijuana with intent to distribute, and on March 14, 2019, was sentenced to a prison term of 18 months, to be followed by a four-year period of supervised release and a fine of $4,000. 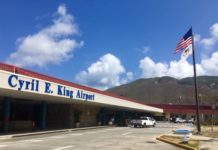