For more than a dozen years, Renata Platenberg and a small team of researchers have been studying the only indigenous mammal to inhabit the Virgin Islands: the bat. The University of the Virgin Islands wildlife biologist was looking forward to spring 2020 when she hoped to see more signs of recovery for the population that was decimated by the 2017 hurricanes.

Then along came the novel coronavirus, SARS-CoV-2, and the COVID-19 pandemic it created, and the U.S. Fish and Wildlife Service issued a directive that all field work involving trapping or handling bats should be suspended throughout the nation.

“In the U.S., bat biologists are hands-off for now,” Platenberg said Friday. “So, we’re sitting tight not doing any work,” except some analysis and cataloging of acoustic recordings gathered in the past.

Various bat species are known to carry some types of coronavirus and China’s horseshoe bat is a suspect in the recent transmission of SARS-CoV-2 to humans. That virus has not been found in the hundreds of bat species found in the U.S. and the directive is aimed at ensuring they are not exposed to it.

While U.S. bat populations have been devastated in recent years by a fungal disease known as white-nose syndrome (which is not found in the Virgin Islands) they typically are immune to diseases caused by coronaviruses, though they can become carriers.

Although apparently rare, transmission of the virus from a human to an animal is possible. A handful of cases have been reported since the pandemic began in March, some involving dogs and cats and one involving a tiger at a zoo.

So even though researchers routinely wear considerable protective gear when handling bats, the fear is that a person could unwittingly transmit the virus.

The mere suggestion of a link between COVID-19 and any kind of bat is dangerous for the bat, an animal that has been much maligned for centuries, if not millennia.

“Globally,” Platenberg said, “bats are not being well treated.”

Locally, she said, a few people have a mindset that all wildlife is bad, but they don’t particularly single out bats for their vitriol. That may be because there are still considerable natural habitats for bats in the territory, so they don’t routinely come in contact with humans.

Worldwide, that increasingly is not the case. Humans are encroaching on animal habitats almost everywhere, so “we’re getting closer and closer to animals,” Platenberg said.

“There’s been a tremendous effort among people who work with bats to shift the focus” from negative stereotypes to education about the role bats play in the ecosystem, she said. They are critical for pollination and pest control, devouring great quantities of mosquitoes and other insects. They also are prolific at distributing seeds, thus promoting plant life.

Platenberg and her team have found five species of bats in the Virgin Islands: Artibeus jamaicensis, Molossus molossus, Noctilio leporinus, Brachyphylla cavernarum and, a species exclusive to Puerto Rico and the Virgin Islands, Stenoderma rufum. Fruits and insects are the primary food source.

V.I. researchers began monitoring bat colonies in 2008 and starting tagging individuals in 2011. They keep track of their size and weight, essentially their “body mass index.”

With that type of data, “we can identify how well bats are accessing resources,” Platenberg said. “We’re missing out this year on that information.”

That is especially disappointing for Platenberg because she was anxious to continue tracking the bats’ progress following the September 2017 hurricanes. Researchers saw a significant decline in the population in the spring of 2018, which could be attributed, at least in part, to the dearth of fruit-bearing trees spared by the storms.

By comparing the numbers of bats her team encountered in 2018 with previous encounters, Platenberg estimated the various species dropped to between 10 to 25 percent of pre-storm levels.

“I can’t give actual numbers,” she said. She doesn’t have enough data to pinpoint the approximate total number of bats on the islands.

“We have thousands of bats, but not hundreds of thousands,” she said, adding “maybe 20,000” could be a reasonable ballpark estimate.

By 2019, some trees were again bearing fruit and pigeon berries – a staple for some bats – were much in evidence, Platenberg said. That gave hope for a resurgence in the bat population this spring.

It’s unclear whether she’ll be able to document a resurgence, or when her team can resume weighing and tagging bats. The hands-off directive from U.S. Fish and Wildlife is open-ended.

She was able to report good news on a related front.

In the fall of 2019, her team worked with the V.I. Health Department on a study of bats, rats and mongoose in the territory, collecting laboratory samples in a search for the presence of certain pathogens.

Tests have shown there is no sign of rabies in the territory, she said.

There is leptospirosis, as was expected, after Health reported a few human cases probably linked to contaminated water after the hurricanes. Ironically, the study was to have moved on to coronaviruses in March, but work stalled during the pandemic. 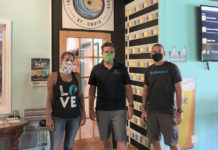 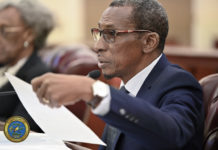