The  second viewing will be held from 9-10 a.m., Friday, Sept. 13, with funeral services to follow right after at Turnbull’s Funeral Home. Interment will be at Eastern Cemetery. 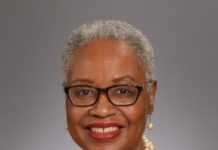