Kitty Edwards, education and outreach coordinator for the Department of Planning and Natural Resources’ Coastal Zone Management Division and a founding member of the Marine Rebuild Fund, loves the Virgin Islands and wants to ensure it maintains its beauty for future generations.

“It seems obvious to protect something so beautiful,” she said. And Edwards is not just talking the talk; she is doing everything she possibly can to make sure the islands look the way they do now for years to come.

Ever since her days growing up in the V.I. and surfing at Hull Bay with her father, Edwards has felt a connection to nature, she said.

Before taking her current position at DPNR, she often found herself requesting time off to volunteer for her passions, including the beach clean ups she has been leading for 15 years.

When the opportunity arose to do that for a living, she dove in.

The first program Edwards started was called Science Saturdays, hosted at Lattes in Paradise at American Yacht Harbor, and that program is still active today. It teaches young children some of the fundamentals of science by bringing in guest speakers and using engaging kid-friendly demonstrations.

She acknowledged some of that legislation hasn’t fully gone the way it was intended to due to being “pushed through quickly and there are loopholes.” She added that the laws are “on the books but not enforced.”

Enforcement is an issue, Edwards said, because only Waste Management officers are allowed to enforce the law, but she hopes that future environmentally-focused laws will allow officers from all departments to enforce them.

The swift passage of the sunscreen bill, Edwards said, was due to the amount of support she was able to receive from Katie Day, an environmental scientist from Surfrider, and Autumn Bloom, from Island Green Living. Day also played a crucial role in the passage of a similar bill in Hawaii.

In the V.I. there was no opposition from government officials and the bill was passed extremely quickly.

Edward’s role at DPNR is to educate the community, and she said she really enjoys teaching kids the importance of being environmentally conscious.

She is in charge of V.I. Clean Coast, an eco-certification program for businesses that she will be expanding to the youth age group this fall through a new program called Clean Coast Junior Agents.

She has already begun talking to teachers about incorporating the program into their curriculum this fall.

Students will have a five chapter workbook to complete, and once they do they will receive a badge and be able to grade businesses on how eco-friendly they are.

The chapters will focus on the right to refuse, reducing use, reusing containers, acting, and taking responsibility.

With the help of My Brother’s Workshop, Edwards is also in the process of working on another project for schools known as Refill Bottles Not Dumpsters. This program’s goal is to give students a reliable source of clean drinking water at school and a reusable water bottle.

Originally, parents were encouraged to bring students to school with a filled reusable bottle, but that option isn’t affordable to everyone. Businesses can now help sponsor a school for the program and their logos will be placed on the bottle of the school they sponsor.

The Community Foundation of the Virgin Islands also helped secure a grant from the Banco Popular Charitable Fund Division for the project.

Edwards also shares her knowledge with counselors and teachers so they can pass it on to students. While she said she does love talking to the kids, this method allows her to spread her knowledge more effectively.

“A changing environment is a gradual change and we see the shifting baselines but it so gradual that people don’t see the need for change. Additionally, it is such a big problem that people can’t wrap their heads around it,” she said.

Edwards said her ambition is that her work ensures “a healthy island and Earth for a very long time.”

The next big round of beach clean-ups that she will be a part of is the CoastWeeks Clean-ups in September. This is a program the Virgin Islands has been involved in for 30 years and collecting data for.

Edwards is available to schedule private presentations for schools, groups or clubs and more information can be found at https://dpnr.vi.gov/czm/. 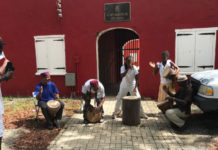