All eyes in the Caribbean and on the U.S. East Coast were on the Atlantic Basin Saturday, carefully watching a trio of storm systems churning their way towards the islands and the U.S. mainland.

One system, Tropical Storm Issac, appears to be on a course that may take it to the Caribbean.

In anticipation of that event, Lawrence Kupfer, executive director of the V.I. Water and Power Authority, said Saturday that the agency is monitoring the developing system for any potential impact it may have on the territory.

“We have spent the past several days aligning our manpower, equipment and supply resources both on island, and from out of the territory,” Kupfer said in a news release issued Saturday. “There have been discussions with the American Public Power Association about pre-staging assets that may be needed should the electric grid be compromised.”

Kupfer said WAPA’s management team has held regular planning meetings to ensure the availability of manpower and supplies needed for any restoration effort.

“We have a considerable inventory of basic restoration supplies on island. In terms of manpower and additional equipment, the authority has agreements in place so that crews from municipal utilities and private contractors can begin mobilizing men, women, and equipment should a storm impact the Virgin Islands. In the event of an impact, they would be immediately dispatched to the territory.” 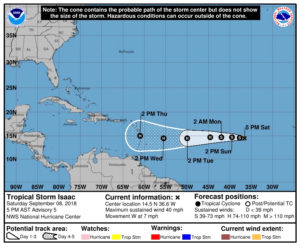 Issac was designated a tropical storm Saturday and seems to be on a track toward the southern Leeward Islands. At 5 p.m. Saturday, the center of Issac was approximately 1,891miles east-southeast of St. Croix, near 14.5 degrees North, 36.6 degrees West. Top winds increased to 40 miles per hour and the storm is tracking to the west at seven miles per hour. Tropical storm force winds extend 60 miles outward from the center and Issac is projected to be a hurricane by Monday.

According to the National Hurricane Center’s 5 p.m. Saturday update, Issac is expected to move on a general west to west-northwest path for the next several days, as an upper level ridge of high pressure pushes the system westward, with an increasing forward speed for at least the next two to three. After that time, there is some uncertainty in the track forecast due to the formation of a mid- to upper-level trough over the central Atlantic.

Conditions appear favorable for gradual strengthening during the next 72 hours, the NHC update said, as Isaac moves westward across the warm waters of the tropical Atlantic.

Helene developed a convective band that wraps about three-quarters of the way around the storm Saturday afternoon, and the intensity of the inner core convection increased.

light vertical shear environment over sea surface temperatures near 80 degrees. This part of the intensity forecast has been increased over the previous forecast and lies near the intensity consensus.

Helene is expected to move westward to west-northwestward for the next three days or so on the south side of the subtropical ridge, then turn northwestward in response to that trough. If it takes that turn, it ought to bypass the Caribbean to the north.

The East Coast of the mainland is bracing for the arrival of Florence, which is expected to be a hurricane by the time it reaches land.

A NOAA P3 aircraft conducted a research mission into Florence Saturday afternoon and measured surface winds of around 60 knots and winds up to 65 knots at a flight level of 8,000 feet.

Florence is slowly recovering from the dry air its circulation ingested while it was under the influence of strong shear. Now that the shear has decreased and the warm waters ahead of Florence reach deeper into the ocean, continued strengthening is anticipated. The official forecast continues to show a period of rapid intensification beginning Sunday, with Florence reaching major hurricane intensity between 36 and 48 hours.

Florence is expected to be a powerful major hurricane on days three through five as it moves across the southwestern Atlantic Ocean towards the U.S. coastline.