The victim’s parents had asked the court to impose the death penalty.

Given the chance to address the court on his own behalf, Charles expressed remorse and said he hoped someday for forgiveness.

“I didn’t really mean to kill him,” Charles said. “I feel sorry for what happened … I tried to de-escalate the matter … I hope the family of Caseam Daniel can forgive me one day.”

He accepted a plea deal and pleaded guilty to second-degree murder. Prosecutors from the V.I. Department of Justice had recommended that Charles serve 25 years behind bars.

In recapitulating the events of that fateful night, Assistant Attorney General Eugene James Connor, Jr. told the court that the killing was captured on video and that shortly after the incident, Charles absconded to the British Virgin Islands. He was apprehended on Tortola after being shot and taken to the island’s hospital for treatment. A police officer recognized Charles from a poster alerting the public that he was wanted in St. Thomas for questioning in connection with Daniel’s death.

He was subsequently brought back to St. Thomas to face charges.

Attorney General Claude Earl Walker said the Department of Justice is pleased with the court’s judgment.

“The sentence will ensure the safety of the community and brings a sense of justice to the victim’s family,” Walker said. “This case also serves as a good example of the benefits of having a cooperative law enforcement relationship between territories that are in proximity to each other, in that officers from the Royal Virgin Islands Police Force were instrumental in apprehending the defendant.”

At sentencing, the court heard from the victim’s father, Carl Daniel.

“This crime has impacted my family’s life so hard that words can’t explain the hurt we’re going through. My son was my rock, my anchor. I feel like I am in limbo without him,” he said, while asking the court to impose the death penalty.

“My son did everything for me. My son took care of me … This has hurt my family so much,” she said.

According to an affidavit prepared by Det. Nigel James in support of Charles’ arrest, officers responded to reports of a shooting in the area of the gas station where they found Daniel’s bullet-riddled body.

Footage from a surveillance camera showed a black BMW convertible bearing tag number TEF 376 arrive at the gas station with three occupants. The driver, Devon Grant, exited the vehicle and went into the gas station’s convenience store. Charles, the front seat passenger, also came out of the vehicle; the third occupant stayed inside the vehicle, James wrote.

Charles walked across the street to the area of Oswald Harris Court, where there was a group of individuals, including Daniel. Charles appeared to get into an argument with Daniel, took a gun from his pants, shot Daniel three times and then fled the area, according to James’ affidavit.

Based on the accounts of several witnesses and information from a confidential source, police determined that there was probable cause to arrest Charles for Daniel’s murder, James wrote in his affidavit. 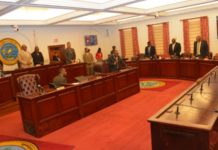