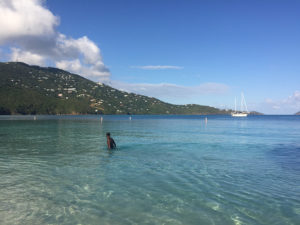 The Department of Planning and Natural Resources (DPNR) announces that the Beach Water Quality Monitoring Program, which evaluates weekly water quality at popular swimming beaches throughout the territory by sampling for enterococci bacteria and turbidity, which is a measure of water clarity, advises the public of the following:

DPNR performed water quality analysis at 37 designated beaches throughout the territory during the week of July 10-14, 2017. The following beaches meet water quality standards and are safe for swimming or fishing:

The following beaches do not meet water quality standards because they exceed the established enterococci bacteria threshold and, therefore, are not considered to be safe for swimming or fishing:

High levels of enterococci bacteria and turbidity may be caused by runoff due to heavy rains, heavy marine vessel traffic, high wave activity near the shoreline, irresponsible recreational use, etc. Runoff can consist of sediment, pesticides, animal feces and oil and grease, all of which are harmful to the waters of the territory.

DPNR will continue to monitor these popular swimming areas. It also recommends that people use their own discretion when swimming or fishing at the designated beaches. If the waters appear muddy or murky or have foul odors, do not swim or fish.

For additional information regarding water quality, call the Division of Environmental Protection at 773-1082 on St. Croix.