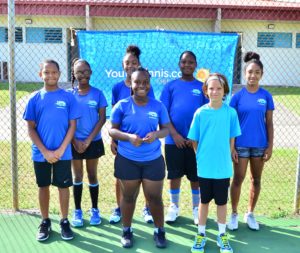 The Ambassadors won the 14-and-under division by accumulating the most points and defeating the Titans, Stinger Rays, and Serve U Rite.  The Ambassadors earned 310 points throughout the league’s inaugural season. Members of the Ambassadors were Fin Miller, Imani Persaud, Naurani Persaud, Maykayla Ramos, Kaiel Wheatley, Kasan Wheatley and Anaijah Peters.

“This was a great start, opening Junior Team Tennis to our young athletes, ensuring they get the experience now to be competitive on a grander stage,” said Natasha Lewis-Flynn, V.I. Junior Team Tennis League program coordinator. “We look forward to adding more age brackets and improving the level of play here in the territory.”

The league was a USTA Caribbean sanctioned league affording the players the opportunity to move on to regional and national competition.  The Ambassadors and Warriors move on to compete in sectionals in Puerto Rico. The winner of sectionals will go on to represent the region at Nationals.

The United States Tennis Association (USTA) is the national governing body for the sport of tennis and the recognized leader in promoting and developing the sport’s growth on every level in the United States, from local communities to the crown jewel of the professional game: the US Open.